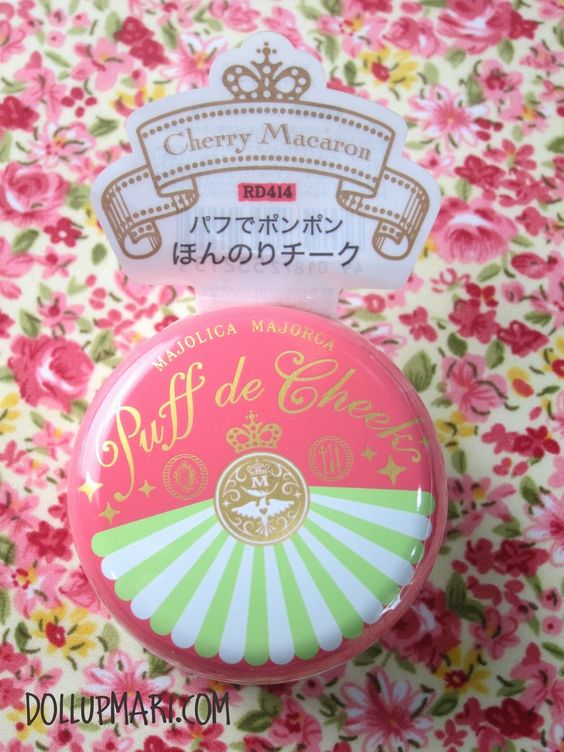 I have a feeling that many of you have seen this item in the stores or online but were afraid to even touch it because the packaging said ‘red.’ Probably your heads were filled with thoughts of Matryoshka dolls, zombie apocalypses, and blood.
But today I will show you that this product is actually the exact opposite of what you all were thinking.
To start off, this is Majolica Majorca’s Puff de Cheek Blush in RD414 or int he shade of Cherry Macaron. Majolica Majorca, on the other hand, is basically a daughter brand of Shiseido (alongside Integrate, Tsubaki and Ma Cherie) and had just celebrated its 10th anniversary last year.

This is their blush. On first sight it looks really cute as it’s tiny (in terms of diameter) and does remind me of macarons. Moreover, what attracted me to this product is that despite being bulky is that it is very lightweight. 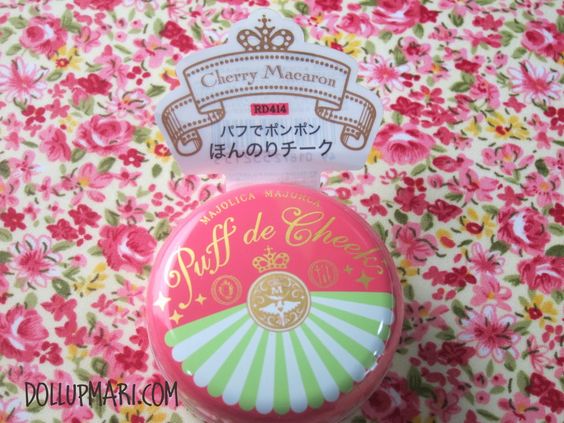 I got this from Taiwan for 380 NT (570 pesos– which I think is cheaper if I remember correctly that this is sold for 725 here in the Philippines) hence the overlay sticker wih Chinese text. This rarely happens with the items I get from Hong Kong because for some reason they just don’t add in translations to the products.
Here you can also see that the product is 7g, and that its SRP in Japan is 1300 yen (Php 650). I have absolutely no idea why the Taiwan price beats the Japanese SRP. Either the Taiwan market is so big that they can afford to sell it cheaper or that they are keen on promoting this to young girls who have many other local choices to choose from that are cheaper (because in Japanese standards this is the average price a girl will pay for a middle range cheek product)…
As the name implies, the product comes with a puff. It’s basically a fluffy puff with a bow on top for grabbing onto. I would honestly go crazy if I open this to find no puff because I’m a Powerpuff girl (pun intended) hahahaha
Unlike many of the puffs my other makeup items have, this puff does not have a ribbon/band crossing the diameter of the puff.
I was initially a bit nervous that by now the puff must have already been stained so much on the other side from rubbing from the blush. I usually like to keep my puffs in best condition so I try not to use them too soon and use them seldomly if I do, just because I want the puff to look like a cute pom pom forever and ever and ever.
I let out a big sigh of relief to find that there is a protective film for the blush. In fact, a text on the film instructs that it must not be thrown away. And not to worry as the film comes with a small handle so you won’t be struggling with removing and replacing it in each usage. 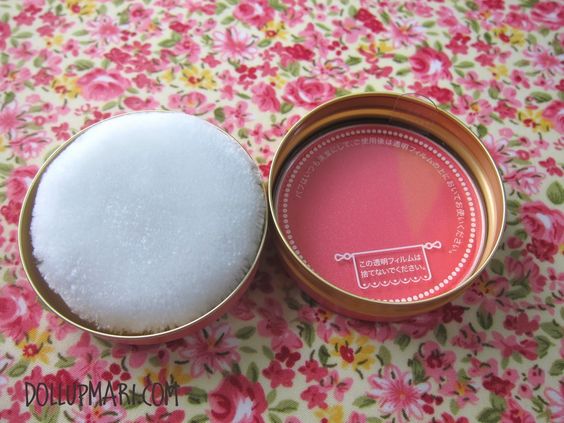 And look at that puff… much fluffy, very cotton, much ribbon (if doge were to describe this)
And for a better view on the color, here are photos of the blush itself in better view.. 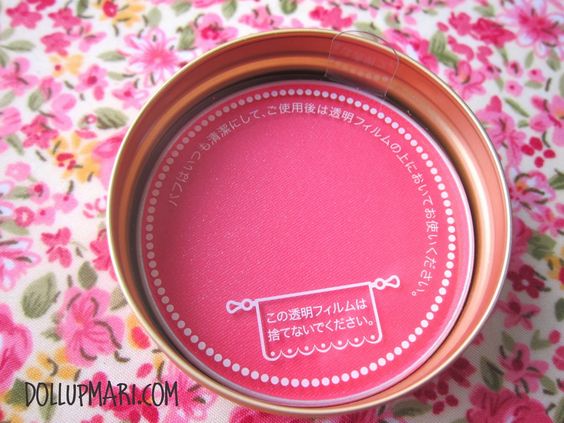 It’s not reddish actually. It’s more of a saturated hot pink kind of color… it literally does have a cherry color to it…

To give more perspective, this is the product swatched on my arm…

Since the first time I wore this it was already nighttime and I removed it after an hour of wearing it, I was not able to test its longevity. So the next day I wore this blush again.
This has no touch of coral nor orange, and is purely on the reddish side. The shade is really warm and I think that helped because my skintone is inherently warm colored… another girl trying this same product may not necessarily get the same results and might prefer to buy the other shades in the product line (because they also make this in baby pink, orange, and electric pink).
After I used it the second time, I was able to conclude results on its longevity. It lasted eight hours without any problems, which I think is already very good for a cheek product. Despite the Philippine heat and me having oily skin, I did not have any fading problems, and that this product did not move on my face.
Value for money wise, I am not sure if everyone would think that this is a value for money kind of product. I do think that this can be used for a long time (I am seeing four years given that I will not use this product everyday), but I do know that CanMake has a similar shade for Php385… and that 570 times two is already close to the price of one NARS blush… This will wholly depend on whom you’re talking to. Honestly I find this a good buy because I got it cheaper than the Philippine price, the color is really cute and suits my overall look, and that one application can last me eight hours with no fading problems.
Since Majolica Majorca is everywhere, you can run to your nearest department store to buy this.
Have you ever mustered the courage to try a less commonly used blush color? Or a crazy color? Please do tell me in the comments box!!!

Happy Halloween!!! Now's the right time to order Halloween lenses from Olens so that … END_OF_DOCUMENT_TOKEN_TO_BE_REPLACED

Olens is here with new lenses again!!! I think they were amazed at the … END_OF_DOCUMENT_TOKEN_TO_BE_REPLACED

And here we are with another lens swatch post! This is for Olens Russian Smoky in … END_OF_DOCUMENT_TOKEN_TO_BE_REPLACED

It's 2022, and beauty is now regarded as a form of self-care. If you're one of those … END_OF_DOCUMENT_TOKEN_TO_BE_REPLACED

Climate change is really affecting our daily lives. It's either rainy or humidly hot … END_OF_DOCUMENT_TOKEN_TO_BE_REPLACED

Milk Tea Mari Era has begun 🧋🧋🧋 This was

I’m not scared of lions, and tigers, and bears.

Well-mannered is better than educated 😂😂😂